I read, as I reached for the phone. He sounds perfect for Kirsten, who had outgrown her Shetland. I called and was told that the pony was 6years old and I made arrangements to take the children out to see him the following day.

The pony was iron gray and very attractive, but not Welsh and when I looked into his mouth he was not six, but only three years old. I tacked him up and attempted to longe him. He learned very quickly and seemed cooperative. I asked ten year-old Tara to hop up and it became apparent that the pony was far greener, than I had been told. Kirsten aged 8 also rode him at walk and trot on the longe. I took a Polaroid photograph of him, and suggested to mother Zoë that she takes it to their trainer and ask him what he thought. The trainer had been trying to sell them a very green pony for a great deal of money, and had told them that he would have some of the more experienced children ride it for a few months. Both girls had riding lessons every day, so I thought that this little pony would be in capable hands. In six months this pony will enable Kirsten to show successfully, I told Zoë.

The Trainer, however, refused to even look at the photo. “I do not have $500 ponies in this barn. We are a show barn, he said through clenched teeth.” 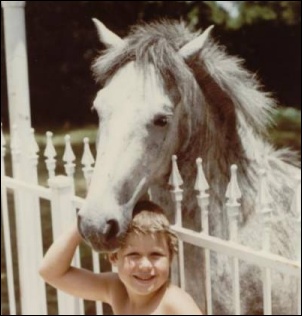 The next day I had the pony vet checked and bought him as a project for our sons Richard 13 and Matthew 11years both of whom were good little riders. Andrew was only 6 but was also enthusiastic about the pony. The boys called him “Gunsmoke” I was recovering from a severe neck injury and knew it would be months before I could ride again. It was great to have a family project. We had a very large back yard in Dallas, we converted the tool shed into a stable and with the aid of electric fencing we made separate paddocks and also kept the pony away from the pool and patio. Each day after school the boys and I would take Smokey over to our church grounds where the children schooled him. We would trailer up to Willow Bend for lessons with Debbie Scanlon. The pony was smart and learned very quickly. By Christmas, Richard won his first ribbon at the Frostbite Show in 2-foot hunter. Kirsten showed him Short Stirrup and also won ribbons.

What a little character he was! When I drew back my drapes in the morning, there was always a little gray face staring in at me.

The boys came home up the alley from Parish Day School at four p.m. Pony would run around the yard in excitement when he heard them coming. One day they had gone to a friend’s house after school. I was talking on the telephone in the kitchen when I noticed that Smokey was standing on the patio looking in at me. “I must go,” I said to the friend. “Pony is banging in the window with his front foot.”

“Crash!” Too late! He had broken the windowpane! Smokey would sense the hot wire with his whiskers; if he thought that the current was off he would pick up the wire with his teeth and walk backwards until he pulled the fence down. That was how he happened to be on the patio. It was suppertime and the boys had not come home to see him!

At night he would be put in his little run. In the morning after the boys had fed him he was allowed into the big paddock that had the fruit trees. In peach season he would gallop back to eat the windfalls and carefully spit out the stones. After that he would go to each tree and lean his haunches on the trunk and shake the ripe ones loose! 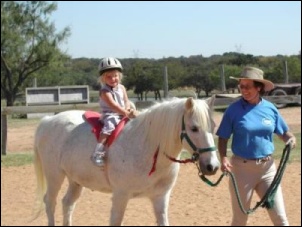 When the weather was hot and the sprinklers came on, Smokey would position him-self in front of the rotating heads and drink from the fountain. He would then turn his back to the spray and follow the stream with his butt until he was nice and wet and cool.

Richard rapidly outgrew him and Matthew competed him during the next year or two. He continued to live in our yard until we bought the farm in 1983. In 1984 Andrew decided that he was going to ride Smokey incase we sold him. After a year Andrew said. “Mommy, please don’t sell Smokey but I don’t want to ride anymore.”

One day a friend told me of a wonderful family who were looking for a pony for their son. I reluctantly allowed them to come and try him. They made us an offer that we could not refuse. Smokey was sold to a super home in Aubrey. He returned three years later for six weeks when Donna, the Mom had surgery. The moment the trailer crossed the cattle guard he banged his front foot all the way up the drive in excitement. As soon as he got out of the trailer he ran to his old friend “JD” and they literally talked and rubbed withers for at least half an hour. He was glad to be back home. Donna and family moved to Houston. Sean had long outgrown the pony but he was family and went with them. He was loaned to various Pony Club families and from time to time I would hear of his whereabouts. He lived in Waco for quite a while and saw many children through their “C” ratings.

I met Louise Hogarth one day at Las Colinas and she said, “We have your Smokey in our barn.” Her Daughters, Julie and Denise used to compete against Richard and Matthew in Dallas H/J shows. What a small world.

In 2001 I was at Hidden Lake show where I observed a small girl ride a beautiful round on a bay gelding. When she came out of the arena, I congratulated her on her performance. Her mother joined us and we introduce ourselves.

“Do you have Quail Run Farm?” Jacque, the mom asked me. “You are Smokey’s Mom aren’t you?” She asked. “Smokey taught Leila to ride. We are his owners!”

We all had a long chat and laughed at the antics of our beloved pony. I concluded the conversation, by saying. “If ever you need a retirement home for Smokey, we would love to have him back”. 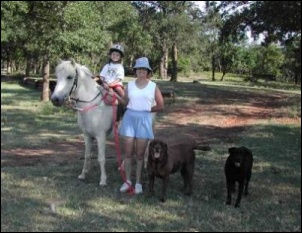 In February 2003 I received a hand written letter from a person whose name I vaguely recognized.

I am writing to you because of our mutual love of Smokey. We had to retire him a few months ago, he let us know that riding even once a week was no longer enjoyable….” Tears filled my eyes as I continued to read the letter. I was almost too sad to turn over the page for I suspected the worst.

“If your offer for a retirement home is still good, my family has come to terms with the fact that this may be in Smokey’s best interest.”

Now I was crying, but with tears of joy. I had always dreamed that our pony would somehow return to us. Suddenly I thought about the reaction the family would have when I told them that we would have yet another horse to feed! I called Richard in Houston and told him about the letter. “What do you think we should do?” I asked Richard. “Go get him of course.” he replied without thinking.

“I thought you might say. ‘Mom, haven’t you got enough horses already.’”

To which Richard replied, “He is not a horse, he’s family.”

Next I called Andrew who was equally excited.

Finally I called Peter. “ Great, when is he coming?”

Smokey arrived with Mom Dad and Leila. Jacque and I hugged and cried, Leila cried and I think that I saw a tear in Dad’s eye too. Smokey was home after 18 years. He was very happy, and put his head down to graze as if he had never been away. The next day he saw his old stall door open and pulled the rope through my hand and ran in to inspect it once again.

Richard, Kelly and 4 ½ year old son Andrew came to visit him the following weekend. We took a photograph of little Andrew on Smokey with Dad and Uncle Drew standing each side of their beloved pony. Two generations of SmokeyWalling riders!

We love you Smokey!

Please contact Jan if you knew our darling Smokey. He made many friends around Houston, Waco and DFW during his life from 1978-2013.

3 thoughts on “Story of Smokey!”